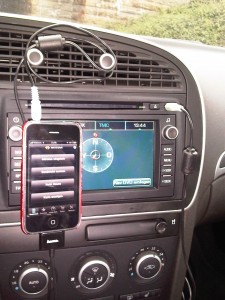 Recently I used to drive a Saab 93. Well not a bad car, but suddenly in the middle of nowhere the sat nav crashed and refused to work. My first thought was what the fuck and my second “Hey let´s do the computer on / off thing.” But cars seem to work different. Even after shutting the car completely down the sat nav continued to tell me “Can´t read the nav DVD”. And it wasn´t to difficult to find out why. After ejecting the DVD I almost got my fingers burned because it was so damn hot that you could boil some eggs on it. But that was just the effect not the cause. I think the people at Saab forgot that there might be people who would listen to music quite a bit louder than the “normal” Saab driver. Like I did. Because the whole radio-cd-dvd-nav entertainment system was hot like hell. Maybe they forgot that modern transistor amplifiers produce quite a bunch of heat when they are loaded and require a good cooling. I understand that this might be a complicated undertaking in a fully packed car dashboard but well, do I care ? Do I have to care ?

No – and so I used my iPhone for further navigation. And in case you haven´t a mount (like me) just wrap the audio cable around the ventilation knob.