When you´re trying to connect to a remote machine / desktop / application you might get SSL error 61 from the Citrix Receiver saying that the DigiCert Global Root G2 certificate is not trusted.

The solution for this on a typical Windows 10 Machine is:

Recently I had this problem and I found this very good (and working) tutorial:

I found this little piece of software in an article at golem.de about the ash cloud from Island. Funny hah ? 😉

But this software is so great that I have to write about it. What is it ? The website says it´s a Freeware Access Tool for mobile Internet. And it´s a software tool that supports numerous GPRS / EDGE / UMTS modems (USB, PCMCIA, PC-CARD, etc.) and a bunch of mobile net providers all over the world. Especially when you´re abroad and don´t want to spend millions for international (data) roaming you can just buy a prepaid sim, insert it into your (sim- & netlock free) modem, select the appropriate profile in MWCONN and there you go – happy surfing.

It´s also very helpful if you need to use more than one data modem. You can create a separate profile for every device and then simply select the one you need.

The tool also allows a nearly endless configuration of everything and supports Windows and Linux. Admittedly the graphical interface of the tool is not the most beautiful and you may need some time before you know how to handle it. But then it provides great functionality, anywhere in the world. They also have a Wiki where you can check if your modem is compatible with the software. 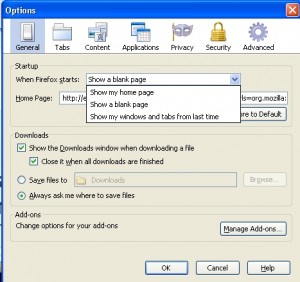 Since I´ve updated my Firefox to version 3.6.2 it doesn´t save my tabs / windows when I close it. Everytime I restart the browser I only got an empty browser window and all the nice tabs I wanted to take care of were gone. At first I believed that there might be a problem with my Firefox profile, but it was just a simple setting. I can´t remember having changed it so I blame it on the  update.

The solution is quite simple. Navigate yourself to “Tools -> Options -> General -> When Firefox starts” and select the following “Show my windows and tabs from last time”.

And yes, the next time you start Firefox all your tabs are there…life can be so easy.

Well I heard many good things about Windows XP 64bit, especially in combination with dual core cpu´s and x64 designed applications. So I decided to install it on my Fujitsu Siemens Si 1520 notebook.

I prepared myself that this might be a little complicated but I didn´t expect such an nightmare. At first I got my hands on the Windows XP 64bit Superior Release, June 2009. It installs pretty smooth and really quick (about 20 minutes total) and recognizes nearly all of the devices.

But…drivers for all the not recognized devices are damn hard to find and in about 70% of the cases simply unavailable. A good try are the Vista x64 drivers – they may not work either ;-).

My installation of Windows XP 64bit didn´t recognize the beloved Conexant High Definition Audio Chipset. And who can live without sound today ? I couldn´t so I started to search the net for suitable x64 drivers. Fujitsu Siemens as manufacturer doesn´t support XP 64. They have a Vista x64 driver, but that one doesn´t work. I found a great variety of drivers in the net, though most of them didn´t fucking work.

It took me around 3 days to get the Conexant Windows Vista x64 driver working, (yeah I know it´s a Vista driver, but the XP 64 driver didn´t work) but than the epic fail. Sound from the internal speakers (sound like shit), but no sound out of the headphone plug. The red SPDIF light was there, but no SPDIF headphones in sight – and by the way – who the hell needs SPDIF headphones ?

I was pretty annoyed, searched the net again, found nothing, got angry and decided to modify the Vista x64 driver on my own. And after some modifications on the INF files there was SOUND – also out of the headphone plug. You can find the modified driver at the end of this article, with absolute no warranty for anything. It should work with nearly any Fujitsu Siemens notebook that has a Conexant High Definition Audio Chipset.

I also own a T-Mobile web’n’walk Stick 3 (a Huawei UMTS / HSDPA / 3G usb modem). Though T-Mobile provides an update for the device, I couldn´t get it working. Also not with the included XP 64 drivers ?!?!

My conclusion(s) so far :

– driver compatibility is a nightmare

– driver support by the manufacturers is bad

– requires too much time to get all the things working

Normally it´s not possible to store files (or a single file) larger than 4 GB on a USB stick because of the FAT32 filesystem. Under Windows XP you can easily change this by converting the filesystem to NTFS.

Open the command line by clicking on Start -> Run and enter convert X: /FS:NTFS (for x type the drive letter of your usb stick).

After a while the process is finished and you´re able to store files larger than 4 GB on your USB stick.